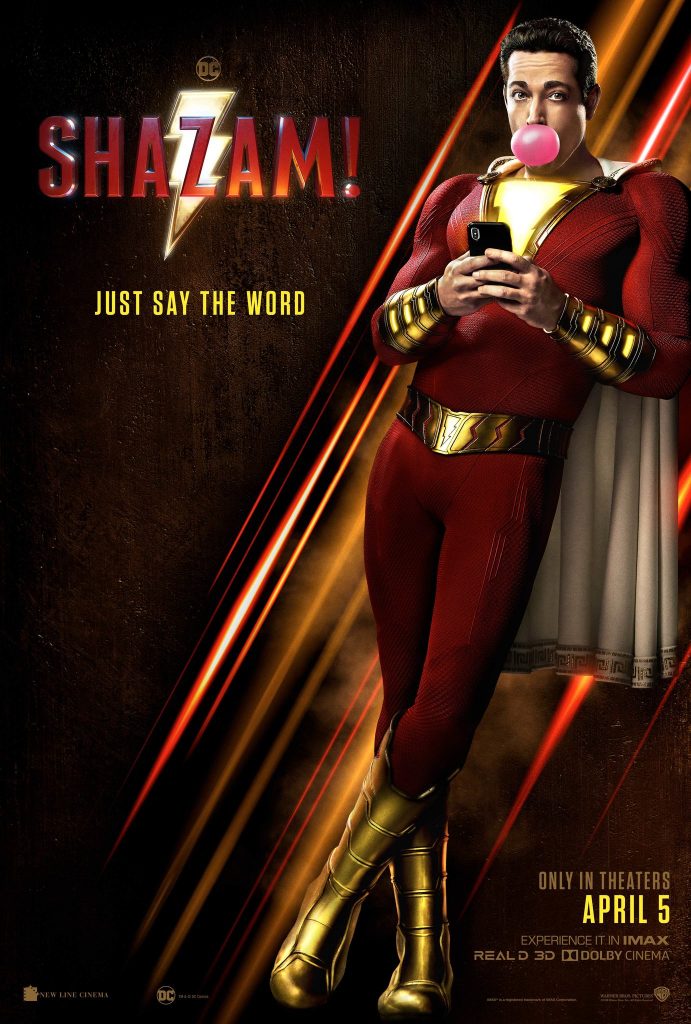 Going into Shazam, I had already heard the rave reviews from all the YouTube reviewers and movie blog sites so I went into it expecting a big ol’ smile on my face and smile I did.

Shazam is fun, cool, has heart and a great pace to it.  You never realize you’re in the theater for more than two hours while you laugh along and go for the ride with these characters.  Family is a big theme for this movie and it’s done in a “cutesy” and fun way that doesn’t get too cheesy so you end up getting the feels about the family when they are going through things in different parts of the movie.

Zachary Levi does great in the role as Shazam.  It’s definitely believable that he’s a kid in a superhero’s body.  His charisma, jokes and how he handles the different situations comes across as if a teenager is making the choices.  The suit looks good, yes, padded a little but I have to say it worked for me.  It just reminds me again to not judge anything with set pictures and to relax and wait for the movie to judge exactly what these suits look like.  (Anyone remember the talk about the preproduction green Captain Marvel uniform too.)

Mark Strong does well with what he’s given in the movie to do as Dr. Sivana.  As usual, when the main part of the movie is to introduce the hero and go along his journey, the villain mostly gets thrown into the role of just giving the hero something to do and fight against.  They tried giving him a decent backstory and a reason to help his character develop more, but in the end, he’s just another villain to defeat in a superhero movie.

To my surprise, they do give Dr. Sivana some villain help to keep things very interesting with the seven deadly sins.  In what turned out to be a cool surprise, since there’s not a clue to the role of these demonic looking monsters in the trailers, we get the seven sins and they do some damage.  One scene in particular that stands out was in a boardroom where we see Dr. Sivana at his best and even I was caught off guard with some of the violence in that scene and the demonic look of each sin.

Another surprise, again not hinted at in trailers, was the introduction to the “Shazam Family”.   Granted we don’t spend a great deal with the family to truly know each one of them completely and truly understand each family member’s power, however it was still awesome to see them kicking ass and working together.

The overall story of Billy Batson is entertaining, touching and heartfelt which is thanks to the help of the cast (especially “It” actor Jack Dylan Grazer, as Freddy Freeman) a good story and a fun time at the theater. There’s also two extra scenes for the diehard Shazam fans and DC fans alike (Mid & Post Credit).  I would definitely recommend seeing this movie in the theater!

And one last note…to all the parents bringing their kids to see this movie.  It looks like a total kid’s movie in the trailers and mostly it is.  Just be prepared for 2 or 3 scenes were things get a little scary and too violent for children under a certain age (personally I say less than 7 or 8 years old).